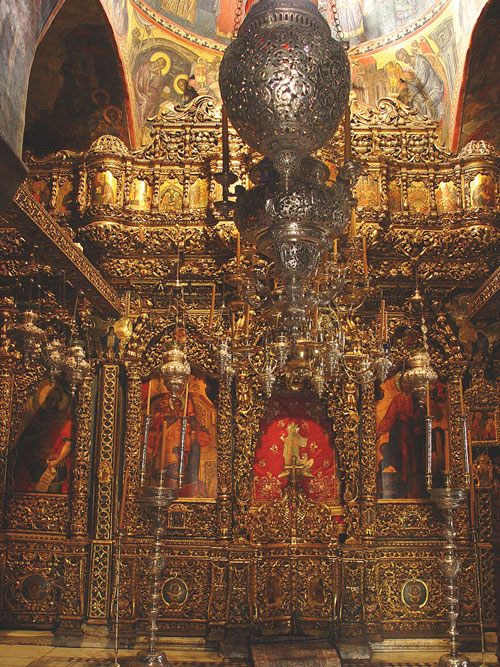 The Monastery of Saint John the Theologian began to be built in 1088 by Saint Christodoulos the Latrinos, who had been granted the whole island of Patmos with a golden bull by the Emperor of Byzantium Alexis the First, Komninos.
He was named Latrinos, because before he went of Patmos he lived on the mountain of Latrous, but due to the Turks he asked the Emperor to grand him the small, desolate and arid island of Patmos, for him to settle there. Some monks and citizens came to live on the island with Saint Christodoulos, who were mainly from Crete and Asia Minor!
The last ones according to the golden bull of Alexis the First, had to be without wives or children! Once the Monastery and the fortress were complete, the need for cultivation arose!
However, as the Saint realized that it would be impossible to ensure permanent inhabitants without families he decided to agree to the settlement of families! In fact he obliged all folk to live away from the Monastery, in the north edge of the island, where monks would not be allowed to go! The borders of the folk area were from Saint Nicolas Evdilos to the area of Vagia!
These people worked and lived in the Monastery five days a week and for the rest of the days they went back to their families! Yet, this solution was also difficult, and in the 12th century a.C., the abbot of the Monastery at the time, forced the farmers and soldiers to live in the Monastery in the summer months, in order to protect it from the pirate attacks, which were beginning during that period!
As a result, in the 13th century, the folk asked to live around the Monastery, so as to be able to be protected but also to protect it at dangerous times! The Monastery belongs to the Ecumenical Patriarchy; it is a Patriarchal exarchate with a Patriarchal exarch, its abbot had special benefits.
The 15-meter tall walls of it gave the image of a fortress, in the middle of the island and during the pirates' attacks the inhabitants were protected behind them.
Above its two and only gates, there was what is called a killer, a type of balcony, from which the inhabitants were able to pour hot oil, to prevent the pirates from entering. The Monastery is built in five levels and its original form of a boat, with its head toward the Ikarian Sea changed, due to certain needs arising for additions and reformations. The cells of the monks are built around the Catholic, according to the Byzantine architecture. Other than that, the building is formed in many different levels and has many of the characteristics of the traditional architecture of the island.
The Monastery has ten chapels, four of which are located in its yard. In the Catholic of the Monastery, there is a temple of unique art, created in 1829, by 12 sculptors. The icons and the frescos in the Catholic are of immense beauty and value.